Touche Hombre is a chic newly opened Melbourne Mexican restaurant in Londsdale Street (cnr Tattersalls Lane). It hums with a packed house (even on a week night) and the winning combination of amazing food, a sense of fun, hip hop, a dim ambience and striking neon signs (designed for the restaurant).

Touche Hombre is a restaurant that's more like a club than a formal dining experience. The crowd is mainly young professionals who undo the button and shed the tie to let loose at Touche. This Melbourne food blog reviewer checked out this restaurant for dinner. 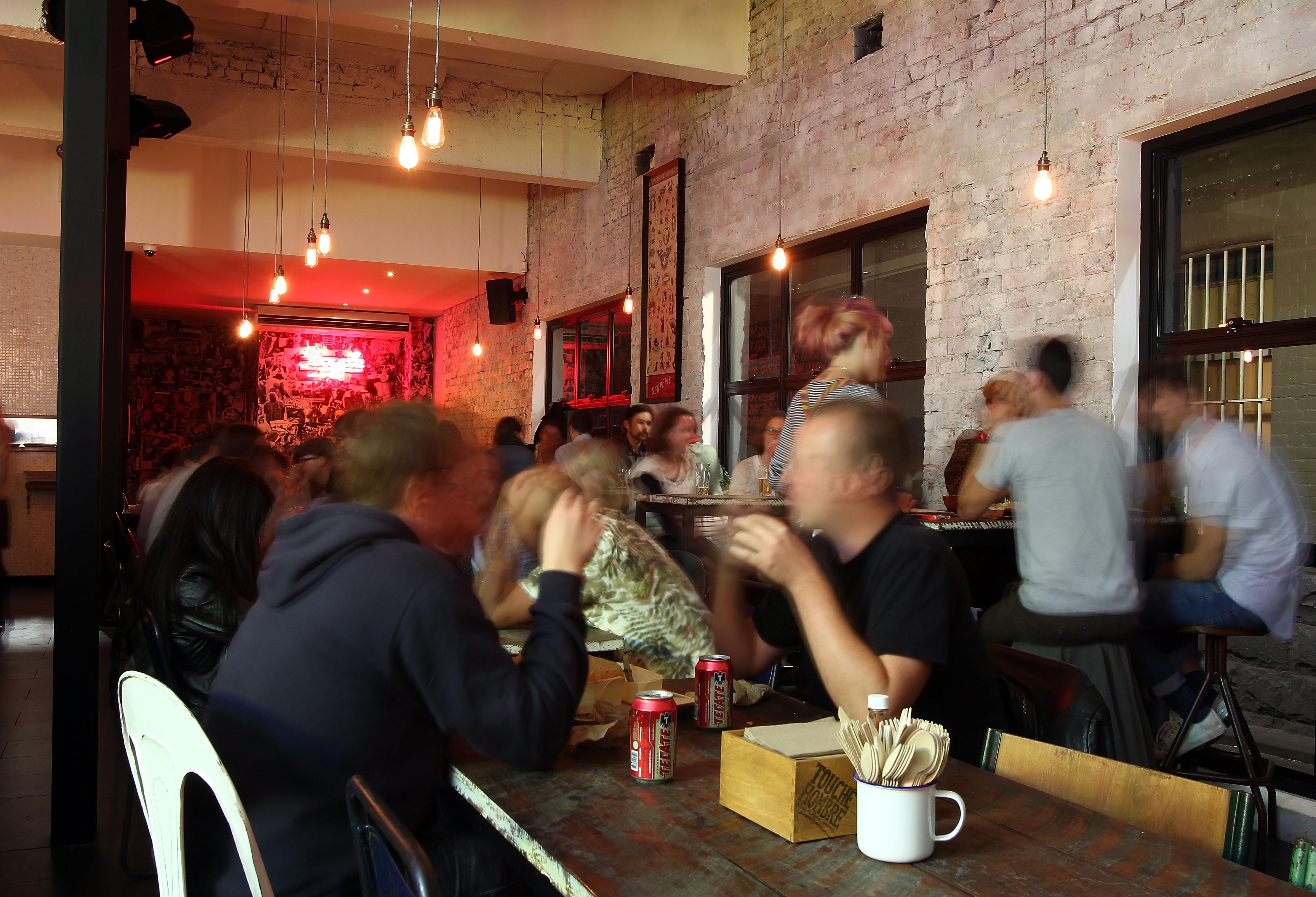 Given there is a wave of Mexican restaurants opening in Melbourne following the success of Mamasita, there’s a need to standout. Touche Hombre stands out because of its chic fitout, great ambience and excellent food. It’s a place that exudes a sense of fun and celebration – which is very Mexican, right?

The concept of Touche Hombre has been carefully managed by a crack team headed by owner Davis Yu, the young early 20’s guy who revolutionised iconic Lynch’s in Toorak and upgraded it to the successful Millswyn. Speaking with Davis Yu you realise he is full of flair and imagination, a passion for the industry, and business savvy. He is a charismatic figure in this viby restaurant. I’m told the concept became reality in only a month. The fitout of Touche Hombre is not overstated but you realise it hasn’t been done on the cheap. The tables are amazing and feature sturdy timber from Princess Pier. There’s so much history in these tables, as Princess Pier was a waterfront pier built 90 years ago playing a key role in Melbourne’s multicultural history. It was the scene of troops leaving and arriving during the First and Second World Wars and the arrival of so many immigrants to Australia. The significance is not lost here on the fact an Asian guy is running a pumping Mexican restaurant in Melbourne. That’s what makes this city so great. There’s exposed brick, a wall with Mexican black and white themes and photos with a neon sign saying “Tequila”. There’s another neon sign near the bar with the quirky “Who You Gonna Call” Ghostbusters theme. Arcade game machines bring an 80s touch. Red candles illuminate the tables. The timber from the bar came from an old bridge. Naked bulbs hang down from the ceiling. 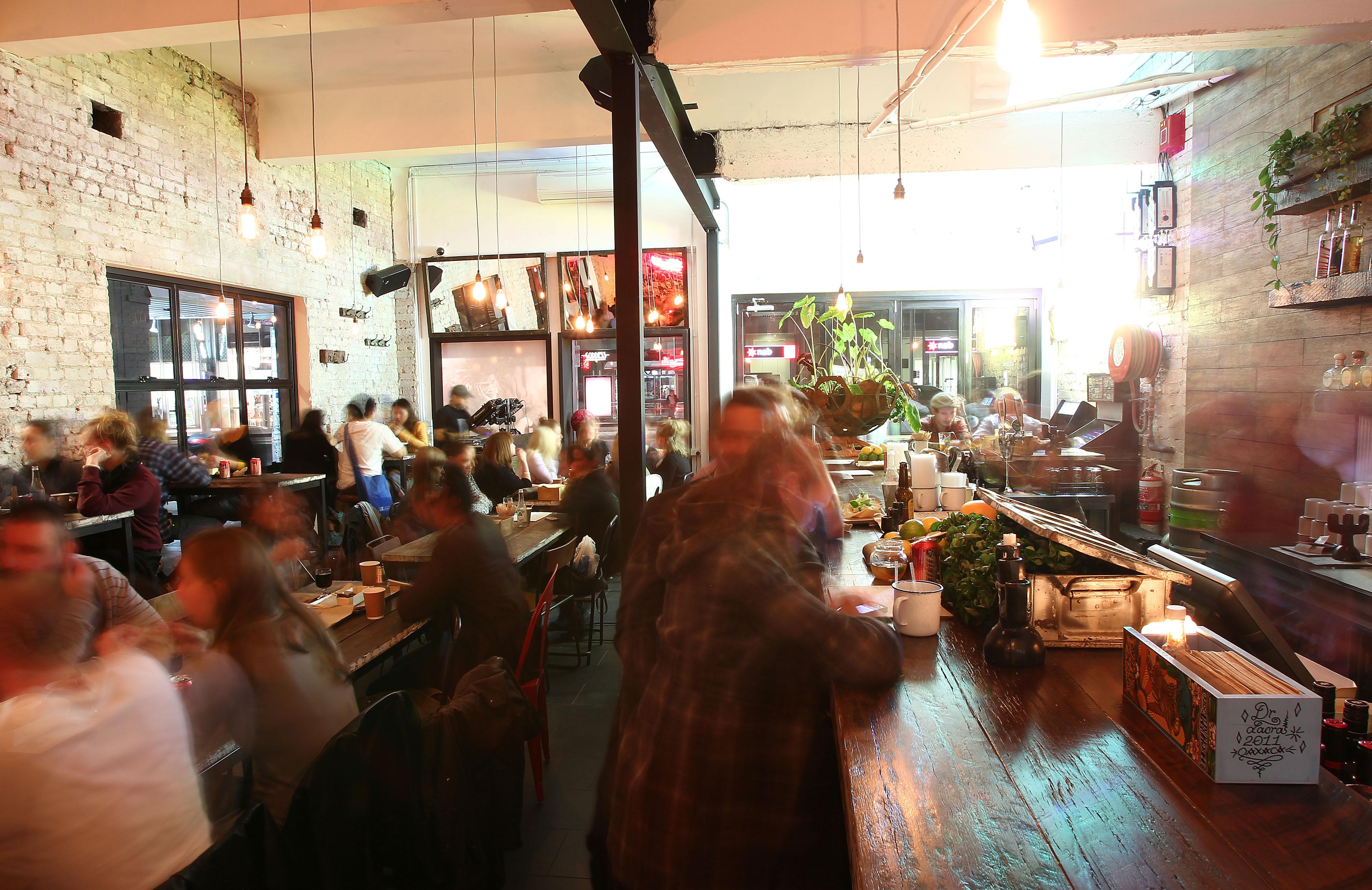 There is street art on the wall near the bathroom. No one knows who did it. But its celebrated. Touch Hombre embraces the street art culture of Melbourne and the official launch included flying in a well known street artist from Sydney to paint a wall. The food at Touche Hombre is exciting and reflects influences on Mexican as well asUSA twists on Mexican cuisine. For example a breakfast taco (omelette, salchicas, egmont cheese, beans, avocado, salsa, and fried onions with habanero cream). This to be eaten as a lunch or dinner option is a great concept. Other highlights include the Corn with paprika and cheese – with the right amount of blackened bliss. The soft shell crab taco with corn cream, pea shoots, lime and mint, is moorish. The Ceviche has a great profile of flavours including diced mulloway, mussels, cilantro, chilli, red onion, tomato and guacamole with tortilla chips. The De Pollo spiced chicken with mango jam and toasted sesame and chiotle mayo was sublime.

My favourite is the fatty lamb ribs with merquen, cilantro, lemon and honey. Not politically correct but can’t get enough.

Touché Hombre prides itself on creative cocktails and fine drinking tequilas (not all are slammers). Margarita’s are served in a large Chicken jug.

Desserts here are also imaginative in visual appeal as well as taste. The Chocolate and Chilli peanut cookie is sublime, as is the Strawberry and pistachio parfait and the Rice pudding and cinnamon parfait. The staff are chic and engaging. No formal aprons here. These staff look like they belong in the fashion industry.

At times there’s a DJ (a real one with dreadlocks). No mistaking this place is aimed at a younger crowd.

Davis Yu is emerging as a leading Restaurateur in Melbourne and Touche Hombre is an exciting new standout restaurant.