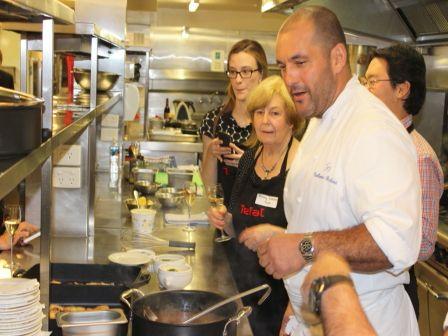 Tefal Masterclass with Guillaume Brahimi at Bistro Guillaume at Crown? What a privilege. I made sure I was there camera in hand ready to cook with one of the great chefs of our generation. Also please check out our Best Soups in Melbourne.

Guillaume has cast his legend on Bennelong in Sydney and is a man on the move involved in a multitude of ventures.

Joining with about 12 media and blogging identities we were warmly greeted by Guillaume in his vibrant charming French way. We then made our way doen the steps to Bistro Guillaume kitchen. Donning the Tefal apron I felt every bit a Chef (well at least I looked like one). 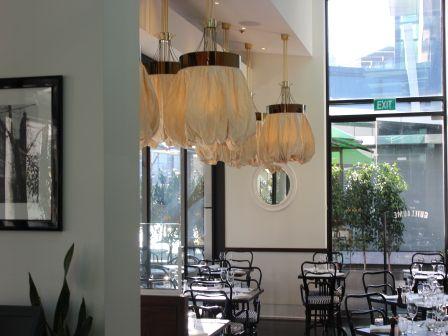 Bistro Guillaume is a charming restaurant that thrills with French cuisine with a modern twist. The location is superb next to the Yarra. The feeling is of space and light due to the high ceiling and large windows. A turn of the century feel with Parisian decor, although its not over the top in terms of its finery. We enjoyed the relaxed feel of a bistro. 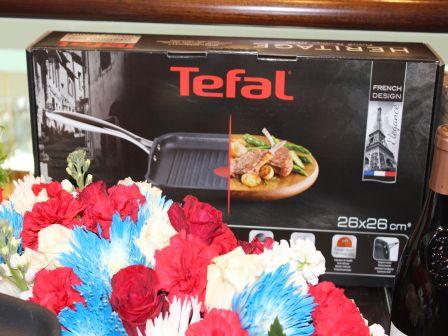 Tefal is an iconic French cookware company of which Guillaume Brahimi is an ambassador. Personally I've purchased Tefal products over the years and have been impressed. These are quality premium cookware products. Cooking is made easier through the thermal spot (red dot in the middle of the pan) - once it heats up and glows you're at around 180 degrees and you can throw on your steak or chicken for the perfect result. It's also cookware you can put straight in the oven, ie no plastic bits. And non stick easy to clean. 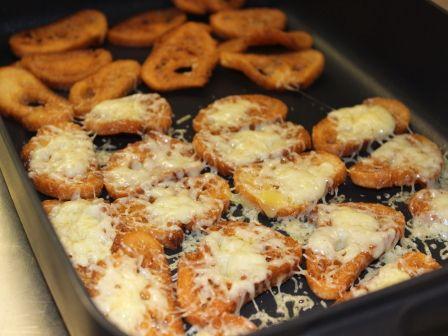 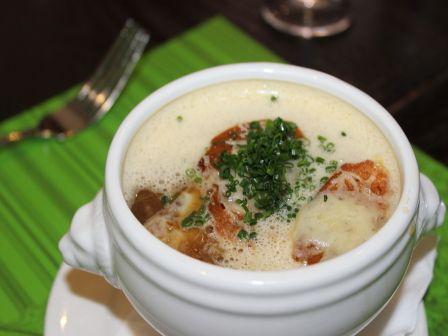 Check it out... Guillaume's dishes are all visually superb. 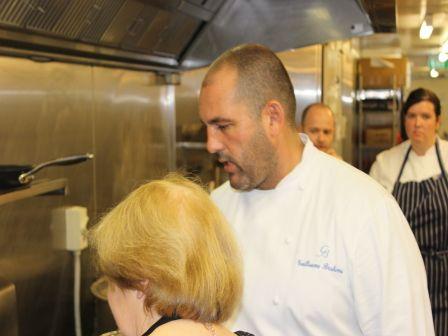 Guillaume has a great team who he has been able to inspire - some of whom were assisting at the masterclass. The message I gleaned was that cooking is not just an individual pursuit but when it comes to iconic successful enterprises like Guillaume at Bennelong and Bistro Guillaume, team is everything. 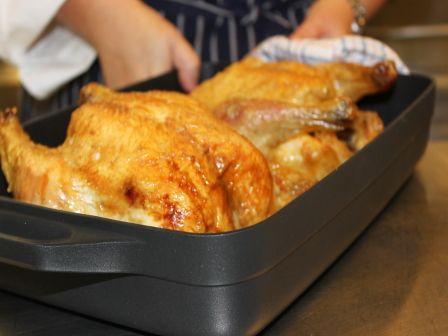 Guillaume loves his chickens, especially when he can get his hands on Barossa's finest free range. Don't buy average chicken Guillaume says, it's worth paying extra for intense flavours and quality. And when you cook chickens like Guillaume the difference is easily demonstrated. Such a succulent dish. The large Tefal roasting trays also play a part in the process. 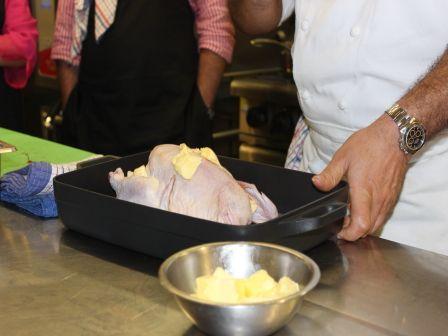 Roast Chicken with Pomme Fondant and Salsa Verde. A dish that is so alluring. Guillaume loves butter, thank God. Above we see Guillaume with liberal doses of quality butter preparing the cooking of the chicken. Thyme, bay leaves and garlic are also added for flavour. Guillaume exhorted us to always test the stock - every cook needs to taste and be able to say "yes, that's how I want it!" 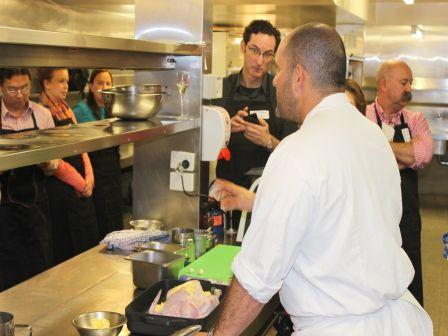 The Pomme Fondants excited with their shape and caramelisation... 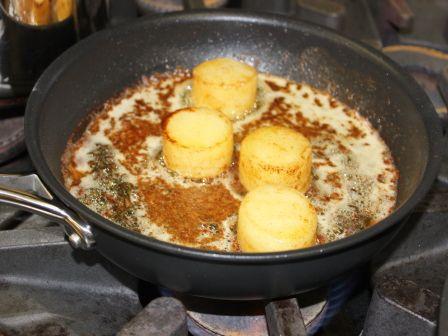 The Salsa Verde was magnificent created in the blender. 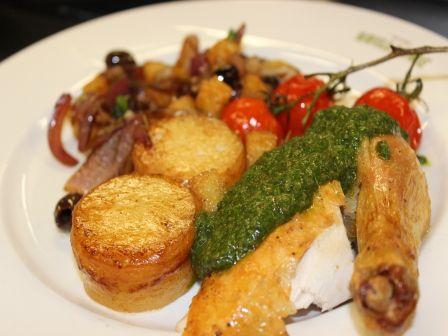 This was a spectacular dish and the chicken was so succulent. The aromas in the kitchen were sensational. 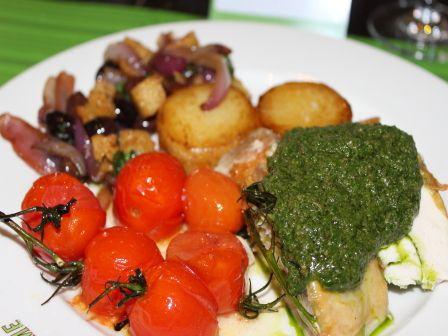 Guillaume encouraged us to buy organic and support local producers. 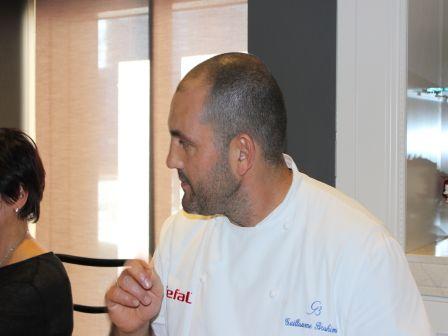 French dessert was Roast Pineapple with Cocunut Sorbet. This was a dish even I could cook.  A peeled and cored pineapple with key ingredient of scraped vanilla bean. Butter, sugar and rum also form the core of the dish. Golden brown pineapple with rum looks wonderfully decadent, and the addition of coconut sorbet is a winner. 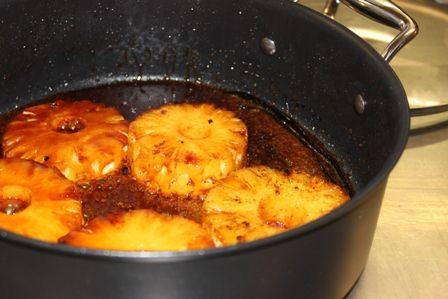 Ripe pineapples have a delightful acidity. I imagined myself putting this together at a dinner party. 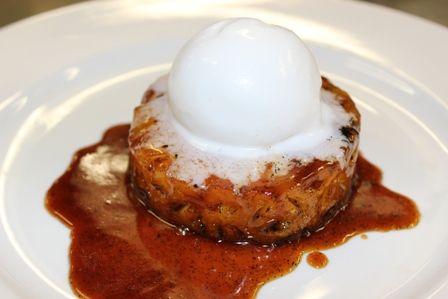 Tefal Heritage cookware is available at Myer. We were gifted with this pan - you can see I put it to use that night in my home kitchen in cooking the perfect steak. 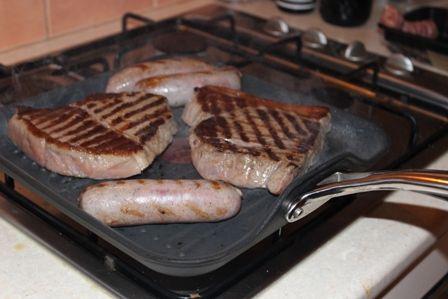 Restaurant staff were friendly and professional and attentive with a smile. Thanks Guillaume Brahimi and Tefal. What a superb masterclass.