Giro D'Italia is a hot new Italian restaurant oozing authenticity and regional cuisine to explore, taking its name from a famous bike race.  I felt like we were on a culinary journey just like a bike race through Italy, with panoramas and vistas before us, without doing all the hard work. Domenico De Marco (Dom) brings Melbourne diners a top notch Italian experience in a revered part of town on Rathdowne Street. In an area full of emerging hot new restaurants, Dom is mixing it with the best, and sets himself apart from the peleton. The World Loves Melbourne was invited along to experience the menu at Giro D'Italia. Domenico is a highly talented chef who has cut his teeth at salubrious establishments in Italy and more recently in Sydney and Melbourne (formerly from Rockpool Group). We visited his previous restaurant l'Altro Mondo, and it was a revelation if not a hidden gem specialising in Italian fusion. You can see our article from those days. Also we have included Giro D'Italia restaurant as part of our Best Italian Restaurants in Melbourne, as well as in Best Schnitzels in Melbourne and Best Tiramisu Desserts in Melbourne. 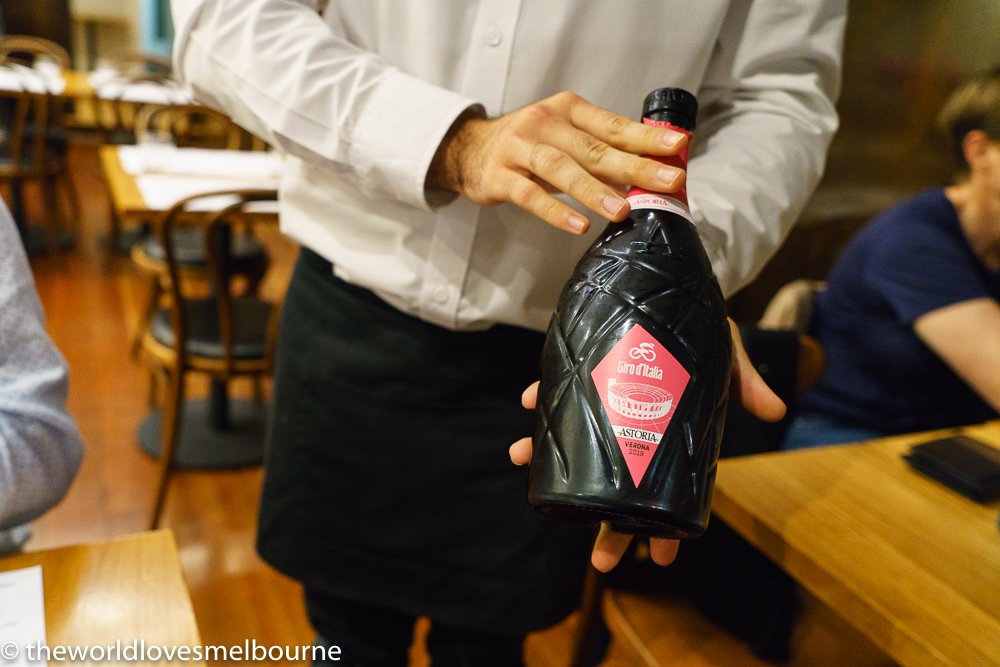 Now Dom has his own restaurant in a "happening" part of town where he is more in the spotlight. And speaking with him the passion is contagious. He says to us "I feel blessed. I'm living my best life." Dom works long hours at Giro but in the few spare hours outside of the restaurant opening times he can be found cycling 100km through Frankston and beyond, as he lives his passion for riding. We are told Dom was a promising rider when younger often out on his bike with a team in Bologne. Giro d'Italia, occupies the old 38 Chairs (and Paragon Cafe) premises and brings it to life with exciting Italian cuisine and a modern influence. It's a matter of featuring the extraordinary Victorian architecture with modern touches. A sexy upstairs function room has also proved popular and in the future Dom plans to develop the downstairs area as well. Outside is a delightful verandah.

Modern lighting gives the restaurant a welcome brightness with backdrop of attractive tiles and bar with bottles showcased. Bentwood chairs provide comfortable seating and there are pictures of the Giro bike race around the room, a bike mounted, and unique bottles of Prosecco connected to the Giro placed around the room. A 3L bottle of the Astoria wine sits on the bar counter. Astoria Prosecco on arrival was the perfect start to our culinary tour.

Some would argue that Italian food is more about the regions than some national generalisation, and this is evident at Giro D'Italia. Respect and appreciation for the regions shines, and that's how we like it. If you're doing a tour let it be genuine. Dishes from regions is the way to go. Dom provides diner with a map of the regions on the menu, defined by their regional dishes. A fascinating visual. Reaching for the stars at Giro D'Italia on Rathdowne Street.

Dom grew up in Bologna, in Italy's north, but his parents were from Calabria in the south, and he knows the regions of Italy well.  It's important to know the distinction between Giro and l'Altro Mondo - not so much fusion at Giro, as more bringing the authenticity of Italian regional cuisine in an approcheable way. Which on occasions is about "less is more" and keeping the simplicity. It's a place where locals can come and enjoy authentic Italian food over a bottle of wine without the formalities. Foccacia is a highlight here; a light version with a killer tomato based sauce. Dom doesn't waste any food here and he uses left over foccacia for crumbing several of the other dishes (clever and the crumbing is top notch). Sardines can be an overwhelming fish to eat but Dom brings a touch of sweetness and delightful crumb of Beccafico Agrodolce. A traditional Sicilian recipe with a sweet and sour taste. The Fried calamari was cooked perfectly with a delightful light crumb, crisp and served with a wonderful squid ink aioli and zucchini and mint. The Calzone and Sicilian Arancini are also crumbed with house-made focaccia, and served with a compelling aioli for each. Arancini are some of the best we've ever had, not oily or "gluggy" but elegant, and filled with delicious risotto with peas and chewy provolone cheese. Calzone are filled with ricotta and spinach; on trend with modern dining and not too "heavy". Porchetta alla Romana, is a rustic and rewarding dish topped with a delicious combination of crackling, roasted capsicum slices, capers and herbs. A great example of simplicity done well. The porchetta is moist, full of flavour, and the topping is the perfect complement to cut through the pork.

The pastas are a strongpoint at Giro (they have a value for money pasta night) and we were able to enjoy four of them. Giro has wines on tap but also a selection of excellent Italian wines such as the Barbera we enjoyed. Gnocchi duck ragu is a rich and flavoursome dish, with a pecorino dolce. Soft pillows gnocchi. Sardinian Fregola with lamb ragu is one of my favourite dishes of the night; the flavour packed in the ragu surprises, and we are told by Dom that he cooks the pasta in the ragu so that the pasta absorbs even more flavour. Vegetarians can rejoice over the Pumpkin tortelli pasta. Large luxe tortelli are infused with sweet roasted pumpkin, parmesan and orange zest and drizzled with a sauce of burnt butter, sage and amaretti biscuits. The orange nuance is from zest so it's enhanced, and the biscuit sets the dish off. Grab a mouthful of all the elements together and you may moan with delight. Tagliatelle with Beef cheek ragu is intense and delivers on your Italian comfort food rustic dreams. Cotoletta alla Valdostana is a rock star dish: a fillet that's rolled thin with a rolling pin so it can be folded "like a wallet" according to Dom. Then it is infused with creamy fontina cheese and smoked ham. It's cooked to golden in butter and topped with triple-cooked potatoes. Indulgence on a plate. It's super rich but you can't resist. My favourite dish of the night, but that's a big call. We enjoyed this dish with an impressive zesty salad featuring cos lettuce with walnuts and lemon dressing. Pollo Arrosto from Firenze is another cracking regional dish. Chicken is cooked twice and a perfectly crispy skin excites. It's a chicken confit; cooking the chicken in its own fat. Italian chardonnay perfect with our desserts. Tiramisu (claimed by the Veneto, loved by the world) is based on de Marco's nonna's recipe and is what I would describe as creamy and elegant (without the cream). De Marco whisks egg yolks with water then sugar syrup to make what's called a pâte a bombe. Dom told us the whisking goes for about an hour to get the right texture (extraordinary commitment). He describes it as "the bechamel of dessert". No overdone alcohol or cream or awkward biscuit here. One of the best Tiramisu desserts in Melbourne. Panna Cotta was also distinctive; elegant dessert with no gelatine and perfect "wobble", served with caramello and banana. This panna cotta is also one of the best in Melbourne.

Giro d'Italia sets itself apart with the passion of Dom. He is a picture of high energy (only gets about 4 hours sleep a night). You may think the Italian bike race theme is a gimmick but it's not; Dom shares a passion for bike riding only secondary to his passion for Italian regional food. Speaking with Dom he knows that sometimes he may make a mistake but he always wants to learn and improve; there is no arrogance about him. Time for a nightcap.

Dom is one of those chefs who engages the diners and he is full of charisma. He talks to customers outside on the street as they leave, his arms moving about in effusive expression. He tells us stories of Italy, Melbourne (he loves it here) and his plans for the restaurant. He regularly engages with our table and describes the cooking technique behind his dishes. (We were also impressed by the wait staff). This is Dom's life. He even sleeps upstairs – and we were given a tour of the premises. We noticed a glass of wine perched near his bedroom - ready to be consumed at the end of a long night. And who knows when that will be. Giro D'Italia is a restaurant that brings quality, authenticity, excitement and joy. What it's all about. Highly recommended.