The Emirates Melbourne Cup is one of the great sporting events of the world. This year 2013 marks the 153rd running of the Melbourne Cup with horses from around the world competing in this star studded event.

The prizemoney of over $6m makes this one of the world's richest races and the 18 carat gold Cup is highly sought after. This is possibly the best staying handicap in the world.

It seems only the other day we were celebrating the 150th running of the Melbourne Cup and I was involved in organising the Union Road festival in Ascot Vale where a street parade attracted thousands of punters. The Melbourne Cup is the race that stops a nation and even non racegoers will place a small bet on the cup or enter the office "sweep".

This is a day when Melbournians dress up and come to the race in their droves. Fashion meets sport and the crowd of around 100,000 at the Melbourne Cup is resplendant in suits, fascinators and fine accesories. In the lead up to the Spring Carnival there are many fashion events including the David Jones Racewear Runway. Having been to the David Jones event, it marks the start of spring in Melbourne and gives a heads up to fashionistas as to what to wear to the Spring Racing Carnival. It reveals the colours, the prints, the overall look, and of course the headwear in fashion.

On raceday the Myer Fashions on the Field  competition is also popular with entrants highly visible to the onlooking public. 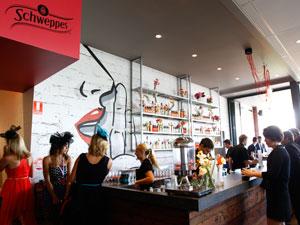 Attractions at The Melbourne Cup and Melbourne Spring Racing Carnival include the Flemington Fling Bar at the track. Here punters can enjoy cocktails and imbibe the carnival atmosphere.

Another attraction is the famous Bird Cage. This is the place where the celebs hang out and is the place to be at The Melbourne Cup.

There's no better place to enjoy the race that stops a nation than in the Birdcage. A series of stunning marquees in a mini village - where no expense is spared. Thanks to Peter Rowland Catering I was able to enjoy their marquee and hospitality at the last Emirates Melbourne Cup. Peter Rowland Catering are behind most of the marquee and other catering at the Cup (and for the Racing Carnival).

Since I was a kid I can remember where I was watching the Cup and some of the famous winners. Growing up my best friend was the son of legendary jockey Jim Johnson who rode three Melbourne Cup winners - Gatum Gatum and Rain Lover twice... I used to go around to the house and be in awe at the Cup images and memorabilia.

I've been to the Epsom Derby in the UK where over 125 000 people assemble in a huge picnic kind of atmosphere. That was awesome. But the Melbourne Cup is a cut above with its air of sophistication and the quality of the facilities. Many say the Melbourne Cup is the pinnacle of world horse racing. What do you think?

I thought it best to catch the train to the Cup and the express train from Flinders Street Station to Flemington took no time (only 6km).

The crowd on the train was demonstrably glamourous. Ladies with their fashionable hats and particularly high heels. Men with suits and ties. Weeks earlier the same crowd had packed onto the train for the AFL Grand Final in their footy scarves and beanies. Today it was about sophistication and finery.

Rolling through the gates in this festival atmosphere one is struck by the pristine condition of Flemington with roses resplendent (yellow is the rose of choice).

The first mission was to make my way to the Birdcage to get my tag for the day. Greeted by PR staff on the door. Chandeliers and couches and lavish catering. This is a place to settle in...

The fashions, the glamour, the fun...

The catering was superb...

Then it was time for the big race. The race that stops a nation. Many stay in the Birdcage but I wandered out into general admission to join the throng trackside - over 100,000 passionate racegoers. A roar goes up when the race begins...

As the horses come around the track towards the finish line people are jumping and screaming and cheering (and taking photos like me).