Longwood Brewery in Nanaimo, Vancouver Island BC,  Canada is a great example of the exciting burgeoning craft beer scene in Canada. When you think Canada do you think craft beer? Absolutely. And BC (British Columbia) is the most craft-crazy region in all of Canada according to the Angus Reid Institute of research! The World Loves Melbourne was given a tour of Longwood Brewery by Brew Master Harley Smith and Peter Kis-Toth (Quality Control), and a beer tasting with Tracy McLean (Growler Bar Manager). We were impressed with the authenticity, quality and diversity of the beer and the craft scene in Canada (that is more advanced than in Australia). 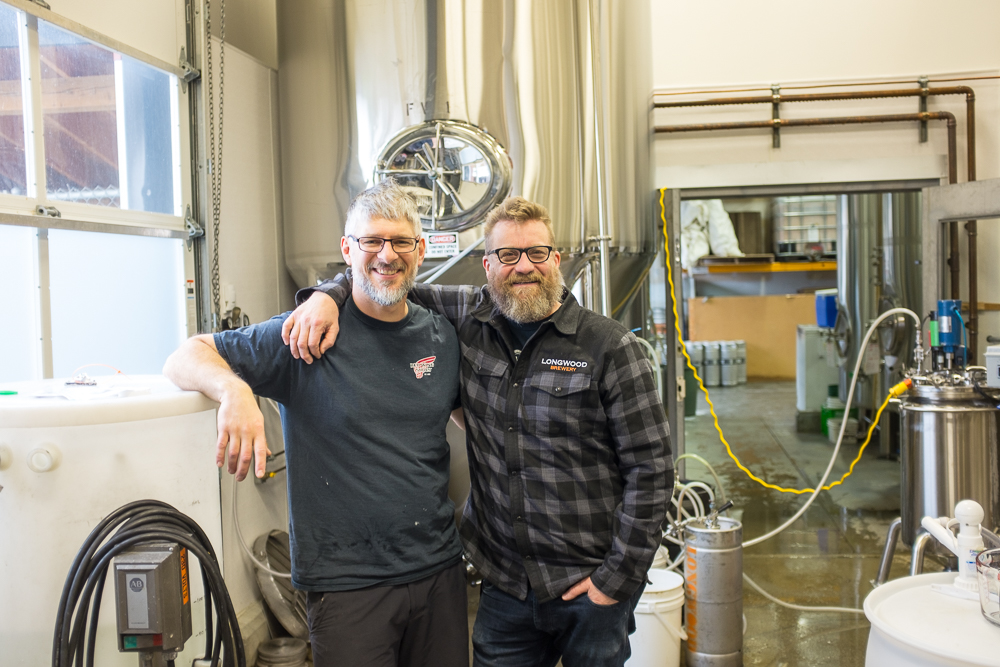 Checking out Longwood Brewery in Nanaimo Canada with Peter Kis-Toth and Harley Smith.

We are told that craft beer accounts for some 10% of beer consumption in Canada; ahead of Australia which is around 3%. There are nearly 1000 breweries in Canada, double 5 years ago. They are leaders in technology, environmental practices and community engagement. What we are seeing is a mature industry in Canada. In Australia craft beer has been around for a while but there are still plenty of people yet to venture into craft beer world. Melbourne has some of the best and biggest beer festivals in the world and we can hold our heads up high. Tasting the brews with Peter at Longwood Brewery. We were given a tour around Longwood Brewery by Brew Master Harley Smith. For a start Longwood prides themselves on local produce and supply. This really is community driven beer. The malt is locally sourced from Vancouver Island, as is the hops. No German malt in sight. This unique brewery has actually partnered with local farmers to grow and malt quality barley and hops. They speak of the "terroir of beer". That means knowing where ingredients come from. Almost all of the ingredients in their beer are sourced from within 100 miles of the brewery. Inspirational. Take a seat and check out a sampling paddle. Or refill your growler. Some of the diverse Longwood Brewery range.

Island Time Lager is easy drinking and every ingredient is sourced from Vancouver Island. A clean and crisp lager perfect for summer (or indeed winter) and a great sessional beer. Island Time Lager is a mainstay. The popular Berried Alive Raspberry Light Ale contains 800 pounds of delicious raspberries in each batch, and is a real crowd pleaser. The colour and flavour is out of this world. Secondary fermentation delivers an extra level of complexity, giving the beer a wonderful tartness and sour nuance. Not super sweet at all. The fresh punch of raspberry tartness features with the crispness of a lightly hopped blonde ale. Refreshing, tart and tasty. When it comes to craft beer in Australia the lions' share is still Pale Ale (92% of craft beer drinkers). Some of the more boutique beer companies soon realised that while they were experimenting with all kinds of brews you needed a pale ale workhorse to account for consumer tastes. While many Aussies switched from mainstream to craft beer, they still wanted to stay in the pale ale lane. While in Canada it's like "IPA is the new pale ale".

At Longwood Brewery the IPA is exceptional. The IPA has changed in recent years. There's a trend to New England IPA; less bitter and more fruity and tropical. A cloudy beer with a sensational hop finish on the palate. Way to go. Dark ales are also a feature at Longwood Brewery including the Steam Punk Dark Ale (above) and the Stoutnik Russian Imperial. We also encountered Milo the Longwood brew dog, the proclaimed number one employee at Longwood (pictured here with Tracy). Every brewery needs a brew dog like Milo. It used to be that small batch brewing meant you were a fair dinkum craft brewer. These days small batches have now become large batches but the quality and uniqueness of the craft beer is still there. We have noted that some smaller craft beer companies in Australia have been taken over by large conglomerates, but the quality has remained consistent, and you could argue they are better off. Notably Mountain Goat. While others are still fiercely independent (consumers still appreciate independence).

I spoke with one leading beer aficionado in Australia who told me "Just simply taste and judge each beer on its merit." Many of the large conglomerates have maintained the small batch recipes. Of course some haven't. But at breweries like Longwood you can't help but appreciate the romance and charm, passion and commitment of a small independent brewery. Peter pouring us beers fresh from the taps.

We are finding amazing levels of innovation in the Australian scene, and it's becoming more funky. Speaking with one leading brewer, he has his "staples" but brings out a new experimental brew every couple of weeks. Whatever takes his fancy. The market always has a hunger to taste the new. In Canada there's always something new, an evolving scene.

In Canada many of the breweries have a tasting room or restaurant connected with them, also a growing trend in Australia. Longwood Brewery has its restaurant in the city, only a short distance away in Nanaimo. Longwood Brew Pub is a fully fledged gastropub, not just an add on or afterthought. We enjoyed top notch dishes designed to pair with and showcase the craft beers. We recently attended Good Beer Week in Melbourne; a festival where a plethora of foodie venues combine with breweries for the most interesting and compelling events. We enjoyed Sea Urchin beer and all kinds of amazing food and beer pairings at Arbory Bar and Restaurant. We sat and chatted to some of the best craft beer brewers in the country including from Sailors Grave Brewing, Stomping Ground Brewing, Green Beacon and Wolf of the Willows. The industry is buoyant, innovative and on the rise.

Sustainability is a key here at Longwood. All the spent grain from Longwood Brewery is given back to a local farm to feed their cows. Beer at home is a thing. Not only in terms of cans. There's a huge Growler culture in Canada. Many here own more than one growler. And we couldn't believe how cheap the growlers are here compared to Melbourne. East to stop by Longwood brewery with your growler for your favourite beers, to last a few days in your home fridge. Longwood offers sampling flights so can you taste before filling those growlers. Enjoying dark ales in the snow with Nachos at Mount Washington Alpine Resort. Another big trend here in Canada is collaborations with other entities; for example distilleries, gelato makers, smokehouses, hot sauce makers, tea companies and other craft breweries. Event only brews are also a thing; we also see this in Australia but not to this extent. Longwood Brewery also has its own Longwood Stock music and craft beer festival at the end of summer. The emphasis is on local music and local beer. Plenty of craft beers on tap at iconic Darcy's Pub Downtown in Victoria BC.

There's even a BC Ale Trail that stretches to the very north of BC from the south and forms a Triang-Ale trail. Trails for ales.

It's worth a visit to Nanaimo and Vancouver Island in fabulous Canada for the stunning scenery, amazing food and of course craft beer! Here's also hoping Longwood Brewery bring their craft beers down to Melbourne.