The Noosa International Food and Wine Festival 2014 is proud to announce the winner of the Victoria state final of the festival’s hottest new competition, the Qantas Presents ‘Australia’s Best Home Cooked Dish Competition’.

Sofia Christopoulos from Mill Park has been awarded the Victorian State Winner title with her Greek Kebabs with Feta in foil and Tiganopsoma, and is now on her way, as one of the six to compete, to the national Grand Final and the chance to ‘rub shoulders’ with top chefs at Australia’s premier food, wine and lifestyle event in Noosa, Queensland, May 15-18.

“I’m absolutely gobsmacked; I can’t wait to inspire other people to cook and to represent Victoria at the Grand Final in May,” she said. 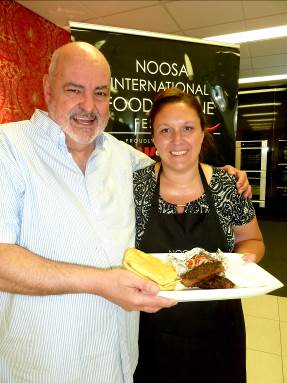 The competition was very close with runner-up places going to Sarah Lewis of Strathdale (Harissa Lamb & Quinoa Salad) and Kate El Idrissi of Reservoir (Berber Pizza) , both doing a fabulous job with their home cooked dishes.

The World Loves Melbourne's Samantha and Sidonia attended the luncheon at Union Dining in Melbourne. We were highly impressed at the evolution of this Festival over 11 years. It's intriguing that the iconic spaces of Noosa are being used to showcase Australia and host iconic culinary events. They even have food trails through the hinterland and events on the beach.

We are now cheering Sofia as she competes in the national competition!

Since the competition launch in September 2013, the Festival has been inundated with aspiring chefs’ entries and recipes to go in the running for the substantial $23,000 grand prize package which includes a trip for two to London, $5000 cash from Westpac, Kitchenaid and ILVE appliances, Mary Ryan’s $2000 cookbook voucher, and the honour of taking out Qantas Presents ‘Australia’s Best Home Cook Dish 2014’.

More than 18 home cooks will battle it out in across Australia in the state finals held at ILVE showrooms this February. The Grand Final of the competition will take place on Sunday 18th May 2014, at the Noosa International Food and Wine Festival, where the competitors will cook alongside top chefs and festival attendees and will be judged by a panel of the leading chefs, Jim Berardo, Festival Director and representatives from competition sponsors taste.com.au and Qantas.

The Festival’s Executive Chef, Tim Montgomery, said the standard of entries is truly impressive. “The standard of home cooking in Australia is clearly very high; local produce is often featured and recipes that showcase our multicultural society, new interest in healthy, tasty dishes served at home and an increased sophistication in our collective national palate,” said Mr Montgomery.

Festival Director, Jim Berardo, was thrilled at the response to the competition.  Jim believes that the interest and involvement of people from all corners of the country in the competition is indicative of how important all regions are to the collective culinary scene in Australia.  “We think this adds an exciting new dimension to the Festival and the chance to go to the heart of cooking; the home kitchen and highlight the best dishes being produced there by home cooks. We are excited to use our Festival as the platform to showcase the incredible talent and love of food that exists here in Australia,” Mr Berardo said.

Competition sponsor, Westpac’s Queensland State General Manager Retail and Business Banking, Michael Wright endorses the competition, confirming that Westpac has been helping Australians fulfil their dreams, for over 196 years, from internationally renowned chefs to budding home cooks. “This is a great opportunity for ordinary people to do something extraordinary and we are excited to be a part of the Australia’s Best Home Cook Dish competition in its inaugural year,” Mr Wright said.

Tickets are now on sale for the Noosa International Food & Wine Festival from May 15 – 18. Visit www.noosafoodandwine.com.au

Highlights of the 2014 Festival include an opening ‘Foodie Fandango’ concert with the Queensland Virtuosi orchestra, a Sixties Beach Party on Noosa Main Beach with a retro BBQ, not one but two Qantas Seafood Feasts with Neil Perry, a Westpac Platinum Lounge, premier degustation dinners and the festival favourites – the hinterland food trails and the Noosa National Park concert series..

Ticketing packages start from $40 to Weekend Gold Passes for $330. Visit the website for more details. Buy tickets before April 1 and receive a 10% discount on most events for the 2014 line up that will, according to Jim Berardo, “strip away some of the formality and be one big party.”