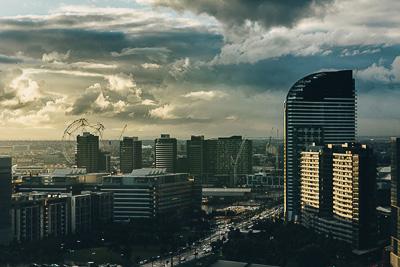 We at The World Loves Melbourne are as concerned about the long-term future of our City and State as we are about the next term of government. As the dust settles on the G20 meeting in Brisbane where world leaders set targets for growth and responses to climate change in motion, why would something as small as the Victorian State election matter?

We in Victoria enjoy relatively high living standards, with Melbourne repeatedly being recognised as the world's most liveable city. Will this joyride just go on forever? Do state elections hold any significant sway in terms of power and quality of life? Isn't it more federal politics that shapes the nation, and even then, aren't we subject to global forces that mostly shape our way of living? The World Loves Melbourne argues the Victorian State Elections are critical for our current and future way of life. We contend that while some say there's little difference between Labor and the Coalition, we think there are stark differences.

When you look back on the history of Melbourne and Victoria you can point to certain governments that made a huge impact on development and life. Jeff Kennett was a figure that has divided Victorians, but many will argue Victoria moved forward in large strides under the Kennett Government. This was a government with a vision for the future. Other States looked at Victoria in awe and wonder during the Kennett years for the ability to get projects up and running. Kennett went into privatisation overdrive, sacked 50,000 public servants, upgraded transport, and implemented a series of high level capital works projects such as the Melbourne Museum and IMAX complex, a new Melbourne Convention and Exhibition Centre (Jeff's Shed), expanded the NGV, major refurbishment of the SLV, a new Melbourne Sports and Aquatic Centre, and the development of Federation Square.

The relocation of the Formula 1 from Adelaide to Melbourne was seen at the time as a coup. Kennett also fostered the Crown Casino and Entertainment Complex, a new football stadium in Docklands (Etihad Stadium today), the huge CitiLink project, and large advances under the transport plan.

We also contend that while Kennett gets much of the kudos from this development, John Cain was a visionary who set many initiatives in motion prior to Kennett. Cain brought many reforms in environment, education, law reform, and public administration. He was attempting to make Melbourne a 24/7 city and extended trading hours, for example. Would modern Melbourne be the same today without the reforms of John Cain and his government?

Steve Bracks was given no chance of defeating a popular Jeff Kennett in the 1999 election but pulled off a huge upset. Victorian elections aren't as predictable as they might seem - you don't always know until election day and the results filter through. Bracks was seen as a leader to address regional Victoria, and implemented the Regional Fast Rail project.

We contend that Victoria can point to the above mentioned, and other governments, that have shaped our lifestyle in major ways. We need governments with a vision for the future, not an ad hoc piecemeal approach to get and stay in power. Our vote will matter in these elections because Melbourne and Victoria matter.

Our concerns with the current Coalition include disunity and the planning and infrastructure policies that are resigning Melbourne to a high rise city with 90 inner city high rise towers planned between 2011 and 2021. Is this the Melbourne we want? We like the $5.4 billion education package and the $4 billion plan for public transport. We're not sure though whether the government has a cohesive vision for the future. Our concerns with Labor include possible over influence of union power in decision-making, costings prior to the election not submitted to Treasury, potential ripping up of the East West Link contracts (diminishing business confidence) and some of its extreme left social policies. A $1.3 billion education package sounds promising, although we're not sure about upgrading TAFE's (so many students study online these days). A $500 million regional infrastructure fund sounds promising for regional Victoria, and we like a proposed $200 million Women's and Children's Centre in Sunshine. But one could argue the approach is piecemeal and we're not sure about any cohesive vision for the future.

Another thing - Melbourne will look very different for those wanting to set up an office in the Melbourne CBD after the election. With Labor wanting a $9 billion rail tunnel under Swanston Street you may want to locate your office in the north or north west of the city. With the Coalition investing loads of infrastructure through Docklands and the proposed Melbourne Rail Link under South Melbourne, you may want to set up in the southern part of the city or Docklands. Even though construction may not start until 2018 businesses are making decision now. There are architectural and planning consequences of this Election.

Every vote of the 3.8 million enrolled voters is critical this Victorian State Election. Our votes affect the things that matter - education, hospitals, essential services, law and order, public transport, the environment, roads, and the cost of living. And they affect the large infrastructure projects surrounding these important issues.

Such issues are critical, but also we contend some weight needs to be given to social issues and, for example, the proposed expansion of equal opportunity. At a forum in Ringwood where candidates met with the public for an election pitch to voters, the Labor candidate was asked about Labor social policies such as church schools not being allowed to employ staff with their beliefs. The candidate just shrugged his shoulders and said, "I don't know why" in relation to this policy. If Labor wins, will they govern for all Victorians? Or push a leftist social agenda on the masses? What will they do for arts and culture in Victoria, an area where some Labor governments have excelled?

We understand much of the media is leftist. If Antonio Gramsci were alive today he'd probably be reporting for the ABC, interested in hegemony of the powerbrokers through modern institutions to the masses. The World Loves Melbourne is a website that sees itself as neither left wing or right wing, maybe a bit of both.

Behind the elation of election promises, the negative campaigning and scare tactics, we need to weigh up the government to best to handle our future. Who can we trust (not just by slogan but in reality)? Who will deliver? Just a State Election?

As an exercise why don't you close your eyes and then try to think of the top 10 policies of each party... Good luck. Maybe that's part of the problem. A cohesive plan and vision for Melbourne and Victoria is lacking.

We desperately need visionary inspirational government to bring us into a prosperous, exciting, innovative future for all Victorians.

This Election matters because Melbourne and Victoria matter. Now and for the future.

Our votes matter on November 29.