Five Years of Women in Leadership - Progress Too Slow 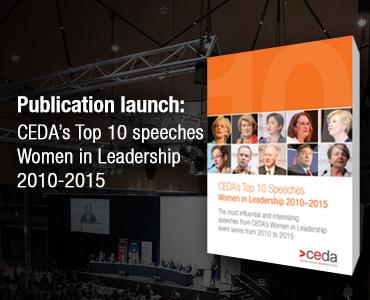 A publication reflecting on five years tackling the issue of increasing gender equality in the workplace and increasing the number of women in leadership positions in Australia shows little progress has been made but there has been a marked shift in how the issue is viewed.

“During the last five years, CEDA has held more than 60 events across Australia seeking to engender discussion about Women in Leadership. More than 224 presentations were delivered at these events and more than 12,000 people attended. We’ve also released two research reports,” he said.

“Despite this and the work of many other organisations and individuals, progress on improving workplace gender equality and increasing the number of women in leadership positions has been slow.

“Unfortunately five years on, the issues and data remain largely unchanged. However, what we have seen is a significant shift in the conversations and discussions on this issue from having to make the case for why gender equality in the workforce is an issue and why it makes economic and social sense to make a change, to much broader acceptance that it is an issue and on to how do we find solutions.

“The other area where we have seen a shift is that increasing women’s participation in the workforce and representation at leadership levels is no longer seen as simply a women’s issue, with men increasingly attending and participating in the CEDA Women in Leadership series events.

“There is not one single solution and in addition to dealing with obvious shortfalls such as a lack of affordable child care and workplace flexibility, it is an issue also hampered by conscious and unconscious bias towards gender stereotypes and cultural norms.

“However, hopefully these underlying changes that we have seen in the last five years, while not the rapid progress we would have hoped for, will help pave the way for much more significant progress during the next five years.”

Professor Martin said the speeches selected for the publication provided a snapshot of the topics and discussions from the CEDA event series and aim to highlight both success stories and also issues that remain significant barriers to women assuming leadership positions.

Additionally, Professor Martin said CEDA has included in the publication 10 issues identified from both discussions at CEDA events and research, which remain significant barriers to gender equality in the workplace.

They are affordability and accessibility of child care; cultural impediments; lack of role models; unconscious bias; the ‘boys club’ culture in some workplaces and often at senior levels; lack of workplace flexibility; lack of women in some fields such as STEM (science, technology, engineering and mathematics); reinforcement of gender roles in the media; the lack of compatibility between school hours and business hours; and low uptake of parental leave by men.

CEDA also asked one of Australia’s most senior female executives and President of Chief Executive Women (CEW), Diane Smith-Gander, to provide her thoughts on the top 10 issues that continue to hold back gender equality in the workplace, which touch on many of the same issues and are included in the publication.

“Improving gender equality in the workplace and in leadership positions is important not only because it is important for a progressive and fair society, but because it also makes economic sense in meeting our skills and labour demand,” Professor Martin said.

“The spotlight needs to remain on this problem. Hopefully this collection of speeches and list of identified barriers can be a useful resource to reflect on the issues and how they may be tackled,” he said.

Speakers included in the publication are: