The World Loves Melbourne is hooked on pho. Here are our favourites in Melbourne (in no particular order) -

Rock star chef Jerry Mai and her brother David are working wonders at Pho Nom in Emporium Melbourne. The pho here is first class in terms of presentation and taste, and you can add your own lemon, chilli, beans and sprouts from the bowls on the counter. The broth is amazing and the meats of excellent quality (I enjoyed rare beef and chicken). And as for the banh mi, it's a sensation... Pho Nom source quality ingredients from top notch sustainable farms and support the locals. This eatery is a coup for those shopping in Emporium Melbourne or working in the city. And the value is excellent.

If you think you know pho, think again. Pho24 has made a big imapct in a short time on Spencer St near Southern Cross Station. Check out the colourful bowls, the friendly staff who can make fresh meals in seconds, a spacious restaurant and passionate owners. PHO24 restaurants are already a household name in Asia, with over 80 stores operating successfully throughout Vietnam, Hong Kong, Cambodia, Indonesia, Korea and the Philippines, offering a healthy alternative to other fast food outlets, with a combination of simple, fresh ingredients in a modern, stylish and welcoming environment.

The meats are prepared sous vide, which is amazing, and there's even a sweet Barramundi pho. Check out the pho prepared in large steel vats, full of flavour.

Footscray is home to some of the best pho in Melbourne, and Pho Hung is one of the best in the precinct. Check out the rare beef and sausage pho, with a huge bowl served up within minutes. The key to any pho is in the broth and Pho Hung have a moorish tasty broth that has you coming back for more.

This place is often packed out, especially at lunch times where Footscray workers know where to go for decent pho. (photo courtesy of their website). Super Bowl Pho & Bun Boe Hue in Victoria Street Richmond is a stunning Vietnamese restaurant and one of the best in Melbourne. From years in the industry with acclaimed Red Rock in St Kilda and a restaurant in Footscray the Hoang family are back after a stint in Seattle USA. 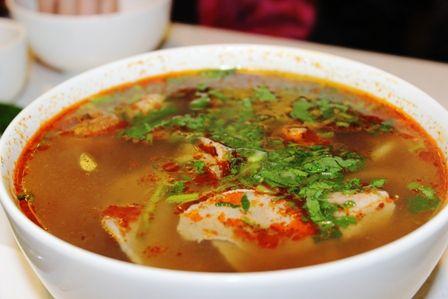 The menu concentrates on fresh high quality cuisine (nothing frozen) and authentic recipes from the regions of Vietnam. Sometimes I get confused at restaurants when they have over 100 items on the menu but Super Bowl does well to narrow it down to specialty dishes. The World Loves Melbourne enjoyed dining as guests of Super Bowl.

Personally I enjoyed Super Bowl (clever name) as being distinctive in its fit out (top end furniture including high back timber chairs and chandeliers, as well as compelling Vietnam themed wallpaper) and its unique broth flavours. Here you will enjoy a classic Beef Pho but also a more spicy broth with the Spicy hue round rice noodle soup with pork loaf soup. And there is the super bowl (feeds an army) challenge! 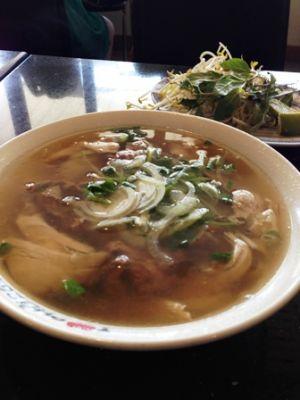 There is something marvellous about a well put together pho. And at I Love Pho 264 on Victoria St you can enjoy top notch pho in a modern funky setting at reasonable prices. Few things are better than a flavoursome broth (some fat but not too fatty), their quality and quantity of meat cuts, awesome rice noodles and the bonus of fresh crunchy shoots and mint and lime. Then choose your level of chilli.

Come here for the traditional pho masters. This was the place that got me addicted to Pho! A massive bowl of the most magnificent tasty broth (not too much fat), had me detecting a sweet and sour thing going on… And lots of meat in this broth – in fact huge pieces of chicken and beef - had me in ecstasy. And then there were massive amounts of soft noodles… mmmm…

How do you tackle this monster pho? I asked the waiter – he said just use a spoon. After 50 spoonfuls of broth I was fast approaching the noodles… I found it was better to abandon a "spoon only" approach for the fork and spoon. Taking the waiter's advice  I attempted to eat the noodles Italian style like spaghetti and that just doesn't work… It was time to add more bamboo shoots, a squeeze or two of lemon, a bit more chilli and go again!

Check out the loyal customers who regularly visit Pho Dzung, including nearby SLV staff. 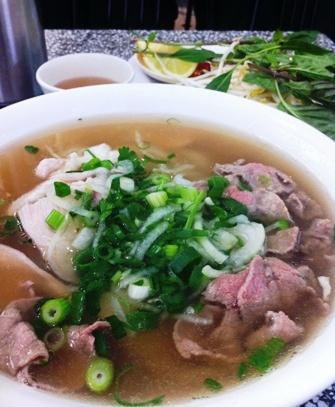 Reaching the impressive milestone of 250,000 bowls of pho sold at its High Street location in just two years, Vietnamese hawker bar Hanoi Hannah is celebrating!  A joint toast with the last day of winter, owners Simon Blacher, Nic Coulter and Paul Nguyen, are shouting free pho to dine in guests between 1pm and 4pm on Sunday, 31 August 2014. 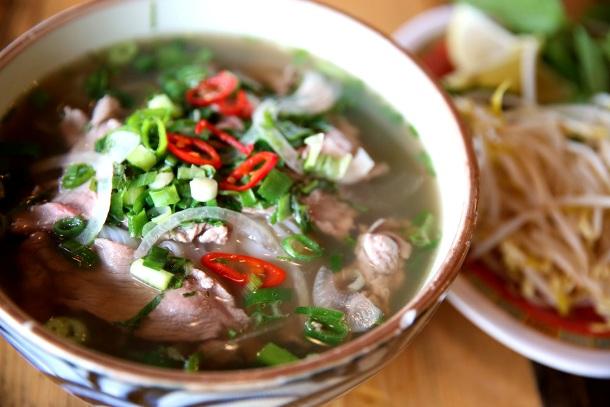 Known for their funky beats on a Sunday, Hanoi Hannah’s has it's own resident DJ. Those feeling a little dusty can let their minds drift with the hip hop and funk rhythms, or jump right back on the bandwagon with a chilli and mint mojito.

Miss Chu has become a Melbourne sensation after great success in Sydney (and now London). Greeted by a waitress as soon as I walked in, it's a matter of finding a seat in an often packed restaurant, and then order. There was a pad next to me with menu options and a pencil, and I suddenly realised this was tuck shop style. (The waitress said she couldn’t take my order although she would like to.) The pho (and everything else) is delectable. 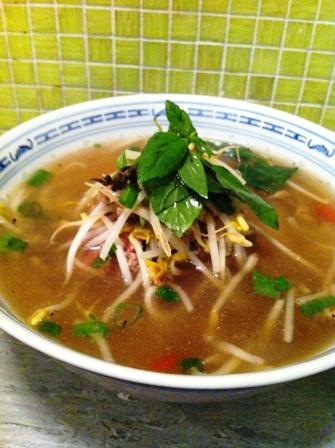 Faced with what to order I often enjoy the combo of beef and chicken in a pho... It's awesome when the beef is on the rare side and the chicken cooked but soft. This was the case at The Pho Chu. Ordering the medium pho size is still a huge lunch. And for the office worker, it came out within a short time.

I love that there are limes here to add flavour - surely these alone add to the cost for the restaurant as they don't come cheap. But when I squirted my lime I think some went out to the dude on the next table. Profuse apologies. 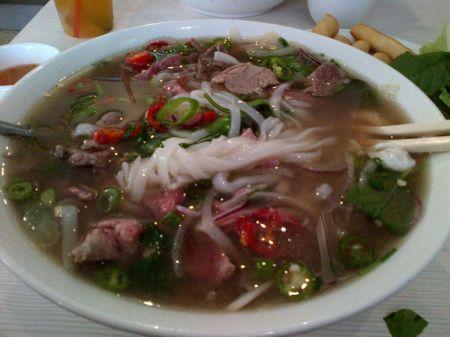 As I dined on this delicious pho I found The Pho Chu to have an excellent ambience with cool artwork on the walls, large naked bulbs and concrete floor. The new generation of pho restaurants have become more upmarket in their presentation. While the pho is the hero it is a bonus to dine in pleasant if not chic surroundings.

Banoi is an exciting bright new Vietnamese eatery in Docklands that impresses with its colourful vibrant ambience, keen service and interesting cuisine. In a sea of bain maries in Docklands, Banoi stands out with its fresh flavoursome cuisine including pho, banh mi, vermicelli dishes and rice paper rolls.

In terms of lunch time value deals, the quick lunch option at Banoi is excellent - pho, spring rolls, half a banh mi and a drink. Just fill out the form on the table and pass it to the wait staff. The pho was first class and served in this large cup. I understand that traditionally Vietnamese joints serve up pho in massive bowls, but I loved this kind of Vietnamese bento concept, of having a bit of everything. I don't always need a massive pho that feeds 6 families.

The pho itself was top notch and full of meat, with a tasty broth and quality noodles. The spring rolls were also tasty with appropriate crunch on the outside and excellent sweet chilli dipping sauce. And the banh mi was also flavoursome in crunchy fresh bread, with pork, carrot, garnish and paste.

When you add up the components you would surely pay more than $20 normally for such a selection. Vietnamese meals in general are some of the best value in Melbourne.